Religious Congregations, Seminars, Literary Forums and Symposium held in Main Cities All over the World;

Montreal, Oct 17, 2012 / — The 40th Death Anniversary of Allamah Rasheed Turabi (RA), the Orator of the Islamic World has been observed with profound devotion and admiration for the blessed soul. In this connection, religious congregations, seminars, literary forums and symposiums were held in various metropolitan cities of the world to pay homage to remarkable services of Late Allamah Rasheed Turabi (RA). 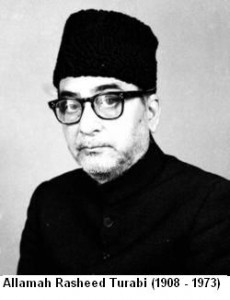 While speaking on these gatherings, Allamah Dr. Salman Turabi, eminent scholar and President of Allamah Rasheed Foundation and Trust International termed the world peace, inter-religious harmony and unity among Muslims as the most essential need of the contemporary world. He said it is indeed the message we have derived from Holy Prophet (PBUH) and thus, Allamah Rasheed Turabi, the orator of the Islamic World had adopted this message as his manifesto and focal point while dedicating his entire life for spreading the same message.

Allamah Dr. Salman Turabi while emphasizing upon moral deeds highlighted a quote of late Allamah Rasheed Turabi (RA) which says that to claim the love for the prophet (PBUH), one requires practicing the Sunnah of the Prophet (PBUH) in letter and spirit. He also recited an Urdu couplet of late Allamah Rasheed Turabi to highlight latter’s continuing intellectual wisdom:

I survived in the memories, Thy acceptance was so blissful

Allamah Dr. Salman Turabi further added that the way intellect, philosophy and thoughts of late Allamah Rasheed Turabi (RA) received admiration internationally is mere reflection of how he was considered as a bridge between various religions and sects. He said that the Quaid-e-Azam, at various occasions during Pakistan movement, had paid rich tributes to late Allamah Rasheed Turabi (RA) for his relentless services. He said due to God gifted capabilities of the departed soul, Quaid-e-Azam had delegated him various significant tasks which were fulfilled accordingly.

During his speeches, Allamah Dr. Salman Turabi said that it is result of the magical oratory of wisdom by late Allamah Rasheed Turabi (RA) that millions of people even today are being benefitted. He said that this wisdom embodies THE PURE which enables human beings to connect their thoughts with the message of Holy Prophet (PBUH). On these occasions, Allamah Dr. Salman Turabi along with thousands of the participants offered prayers and Fateha for the departed soul of Allamah Rasheed Turabi (RA).

As part of measures to cater for the growing population of Cameroonian refugees in parts of Cross River State, southern Nigeria, the United Nations high Commission for Refugees, UNHCR, will set up a field office in the capital city, Calabar.Antonio Jos…

As tribunal declines Ize-Iyamu’s plea for extra timeCounsel to the petitioners – Peoples Democratic Party (PDP) and her candidate, Pastor Osagie Ize-Iyamu in the September 28 governorship election, on Friday closed their cases without calling up to 10%…

MR NIBLETT: Welcome to Chatham House, excellencies, lords, ladies, and gentlemen, and welcome also to this 2016 Chatham House Prize ceremony. We’re delighted that so many of our members are here with us today; also supporters, guests, thank you very mu…