Super Eagles Head Coach, Stephen Okechukwu Keshi was again on the hot seat Wednesday morning, for the last time before hostilities start at the Afcon 2013 Nations Cup in South Africa, during the weekly media chat and he gave a comprehensive overview of how training has been going on in camp.

He revealed that new Warri Wolves acquisition, Chibuzor Okonkwo, who was scheduled to head to the Faro, Portugal camp of the team, may have missed out due to the fact that he does not have a valid Shengen visa for the trip and it will take a minimum of 10 days to get that sorted out with. “By that time we will already be rounding off our training, that is why we may have to leave him behind”, he declared. 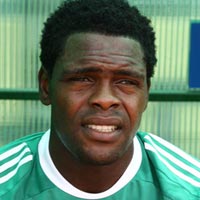 Keshi also revealed that Kano Pillars’ Papa Idris and Enyimba’s Henry Uche have been offered opportunity to hustle for shirts in the Faro camp and should be travelling with the team on Thursday. The duo have been excellent in training despite the fact that the list of home based players for the camp has already been released.

The longest serving captain of the national team also spoke on the international friendly against Catalonia, of Spain, noting that he fears the weather may affect his team but noted that the players will give the game their all.

“I hear that 10 players from Barcelona will be part of the team, that is great news and its an opportunity for my boys to show that they have the capacity to play against the best footballers in the world. The scoreline may not matter but we will not disappoint Nigerians.

On his goodwill message to Nigerians, Keshi urged Nigerians not to cease praying for the team as he foresees the team putting smiles on the faces of the numerous soccer fans in the country. “We need their support and prayers and hopefully we will put smiles on their faces at the end of the championship in South Africa.”

The Edo State Polytechnic, Usen, has struck a partnership with the National Space Research and Development Agency (NASRDA), for the optimal operation of the institution’s Center for Geospatial Information Science, paving the way for professional traini…

The Kano State Director of Sports, Malam Bashiru Ahmed, has said that the aim of the state is to surpass its previous performance at the Youth Games, holding in Ilorin.Ahmed said that the state is participating in more individual events.This year’s Nat…