When she strolled playfully into the premises, not many people believed she was the newly crowned youngest non-inheritor millionaire in Nigeria, having broken the previous record set by Solomon Ebuka Nwanke Ubani who became a millionaire at age 20. Amarachi Uyanne, the  8-year old girl who emerged winner of the maiden edition of Airtel Nigeria sponsored Nigeria Got Talent is already dreaming big.

The young lad who has been dancing and singing since  age 5, but only recently came into limelight after winning the show was the guest of Vanguard Media Limited last Tuesday. She stormed Vanguard Head Office, in Apapa, accompanied  by her mother, Mrs Uyanne and a team from Airtel Nigeria. In this engaging interview,  she shares the story of her journey into the competition as well as what she plans to do with her prize money.

How old are you?

How did you get into the show?

My mum bought the form and filled it for me. That was  how I got into the show.

What was your audition experience?

How many of you went for the audition?

Where you surprised that you won the reality show?

Did you work for it?

Yes, I worked for it. I rehearsed for almost one hour every day. We always wake up at 6.00am, go into the studio to rehearse after which we return to our hotel rooms.

When you were announced as the winner, what was your reaction?

I was so happy but a little nervous. 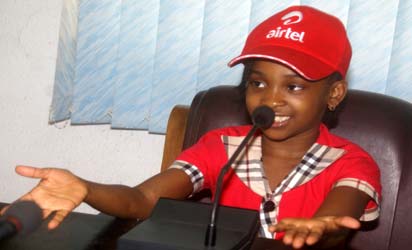 Why were you nervous?

I was nervous because I didn’t know I was going to win.

Why didn’t you know you were going to win?

Because when Andy Blaze, the moderator came on stage, he stood by the side of Godwin.  I taught Godwin was going to be the winner. Later, he said everybody should stop, I didn’t know he was going to kneel down to announce my name as the winner, that is all.

When you heard you name Amarachi announced as the winner, how did you feel?

I felt so happy and excited.

Have you heard about the show before?

How did you develop all those good dancing steps?

My mum and my dance instructor taught me how to dance. I am a born dancer.

At what age did you start dancing?

I started dancing when I was five years. I dance when they are playing music. I like dancing a lot.

How are you going to spend the money?

I will use part of the money to support the orphans in our society. Also, I  will pay my tithe in my church as well as fund my education and that of my siblings abroad.

When do you hope to travel abroad for your studies?

I want to have my secondary education abroad.

Are you the first daughter?

Yes, I am the first daughter. I am planning for my siblings now.

What special skill did you learn while the show lasted?

I learnt Sasa and  Brake-dance.

Was there anything they did that was strange to you during the show?

No, I am at home with everything they did in the cause of the show.

Were you friendly with other contestants?

Yes, I was friendly with everybody. I am already missing them now. Chuka, Bose Salami among others.

What new things did you learn while in the house?

I learnt to be friendly to other people.

What would you have done if you didn’t win the prize?

I would have been very angry. I was so sure of myself that by the grace of God, I would smile home with the prize.

Is it allowed for somebody to come back and contest?

No, they will not vote for the person.

Our plans for Amarachi— Mrs Uyanne

Mrs Uyanne briefly explains how she intends to manage her daughter to realise her dreams.

As the pillar behind your daughter’s success story, how were you able to achieve this great feast?

It’s by the grace of God. I thank God for helping me discover the talent in her. I have always known that she is the showbiz type, though this is not her first competition. She is into beauty contest, apart from that; I also noticed she can also dance very well. She is the princess of her school, she will be handing over next year. She is also Miss 7 UP in Edo State.   I didn’t really think of the competition when I was filling the form for her. I just wanted her to get use to the crowd and learn to conquer stage-fright. But you can see where it has landed us today. I thank God for everything.

Were you surprised that your daughter won the star prize?

Not really surprised.  She was progressing day by day in the house. I noticed only one thing, everybody there was very talented but Amarachi was outstanding. She was very conspicuous that the grace of God would see her through and she held unto that. Whenever you speak with her, she would tell you that by the grace of God, she would win the show. I believe that if you believe in God, He will not fail to provide you whatever you ask of him. I believe also that if she holds on to God at this early age, God will not let her down.

Now that you have discovered her talent, how are you going to manage that talent?

Well, we have already started the journey. We are starting a personal dance school for her where I am going to bring in dance instructors  to  take her on dance. I believe that the more you teach her, the better understanding she gets.

Do you still want her to go into singing too?

Yes, she has to combine everything.

Has she composed any song before?

Not really. But she sings in our church.  I had in mind of managing her myself so that she will not be distracted from  her education.

She talked about travelling abroad to continue her education. How are you going to help her achieve this dream?

After the show, what is the next plan for her?

I know we are going to be getting calls which has already started. That’s why I want to manage her personally. I don’t want any distraction.

When she was announced as the winner, how did you feel?

I was overwhelmed, I couldn’t utter a word.

No fewer than 23 people have died and several others injured following an attack on an animation studio in Kyoto, Japan, Local Emergency Officials have said.The incident which is suspected to be an arson attack occurred on Thursday morning.Local media …

The Minister of the Federal Capital Territory, Muhammad Musa Bello, has insisted on the strict implementation of the Abuja master plan, to avoid the congestion problems experienced in Lagos, southern Nigeria.The Minister made the call while flagging of…