For septuagenarian  film maker and former chairman of the Nigerian Film Corporation (NFC), Chief Eddie Ugboma(OON) today is significant in so many ways. Apart from the fact that he will be rolling out drums to mark 72nd birthday anniversary, one of his daughters is getting married today.

Also, the naming ceremony of his grandchild coincidentally holds today, all roads lead to his Badagry residence. But despite these multiple celebrations, Ugbomah still finds time to reappraise the industry called, Nollywood and  his grudges against the practitioners.

There is no new story. Iam thanking God that  I am 72  today. My daughter also is getting married today.  My other daughter had her first baby recently. So, I will be having five celebrations  all in one; naming ceremony of my grandchild, traditional marriage of my daughter, my birthday anniversary, Christmas  and New Year celebrations.

How has the journey been so far?

The journey has been very fantastic. I am happy with myself but sad for the industry in a way. It has not met my expectations. It started off on a good note, and mid-way, it started showing signs of deterioration and now, the industry is dead which is sad. When I am talking, I am talking about my profession that is movie making. 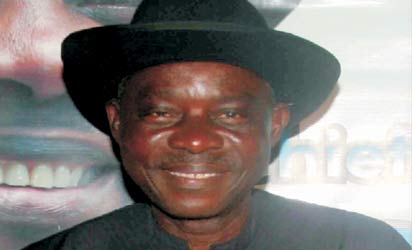 Do you think there is anything to celebrate in Nollywood at 20?

I believe we have a lot to celebrate.  The early practitioners shot with cameras, making a story out of it with no sound studio, no set, no location and everything was improvised yet they were churning out very good but badly told stories, technically poor. At least, the films were made in Nigeria for Nigerians. I think the industry has come of age.

There are a lot to celebrate. Afterall, Nollywood has done more good to this country than most of our politicians. But now, I am so disappointed that the last five Information Ministers did not impact positively on the industry. I am talking about past and present Information Ministers; starting from Chikelu to the incumbent Minister,  Labara Maku. Maku is now 18 months in the office, yet, he has never had any roundtable talk with Nollywood practitioners.

What is your grudge with the industry?

The practitioners have refused to  improve on the quality of their works. Secondly, and perhaps, the saddest part of it, is that they are watching the industry dying systematically.  What do you do, when you watch somebody kill your baby? Then,  I am sorry for you. You find out that each of the guild have up to five presidents because they want to use the platform to collect peanuts from the government, not because they want to improve on  the industry.

That is what these guild leadership tussle is all about. Whether it is in Nollywood, Kannywood and Yoruba movie sector.  Sometimes, you feel embarrassed as a Nigerian film maker watching our films on television. People around you would quickly urge  you to change the channel because the film is boring. That  is how low it has become .

That’s my grudge  with the industry.  They forgot that Nollywood is a big industry that is even mightier than the oil companies.It is the biggest employer of labour. In times like this when people are depressed and sad, movies and music make one feel happy again. I have many disappointments with the industry. They don’t know what they are playing with; they are playing with a very powerful industry. It is an industry that provides  a lot of jobs to our youths.

Is the new Nollywood, where they use mostly new faces instead of the old popular ones a good development?

Well, I have not seen any appreciable  change in the whole thing because, the last five movies I have seen is the same old faces like, Desmond, Monalisa, Rita Dominic,  Ini Edo among others. So, it is the same vicious circle. The people who are behind this practice are the lazy producers and marketers.

They don’t want to create stars when there are many of them hanging out there. They want already made stars where they can shoot the film on Monday  and put it  in the market on Tuesday.  When we were shooting film in Bayelsa, which my nephew, Twila Thompson was the director and it was her own movie, she invited me to come over as a consultant.

The movie was titled,  “Up Creek” It’s about the oil spillage and the nonchalant attitude of the government. We found out that many Nollywood stars do not want to stay on the location for more than five days. They want everything to happen within a day.

So, I don’t want to mention their names, but three known stars were dropped. They cannot stand the rigidity of film making. I buy the idea of the new Nollywood because  there are several universities in the country that  are graduating students from the Theater Arts Departments.

Again, greed has jettisoned,the profession of video directing.They have also made it obvious that if you are not fair-complexioned, you cannot get a role, they brought  Nonso Diobi and Mike Ezuruonye to destroy Ramsey Nouah. When they felt their plan did not work out, they brought two Ghanaian actors, Van Vicker and Majid Mitchel into the picture.  If they had brought in those two actors to make our films acceptable to Africans, it would have been better but, they brought them to sell their films because they know that anything fair normally attracts the eyes.

What plans do you have towards the documentation of your celluloid films you talked about a year ago?

Unfortunately, I have not been able to do that because it is capital intensive. I have thirteen series that I want to document. I need to do a compilation of the movies that have been shot from 1945 till date. So, I have been trying to do that.

I need to collect the negatives of Ogunde, Ola Balogun, among others to enable me carry out the documentation. So, I have told the Nigerian Film Corporation to fund this project and put them in the archives so that we can retrieve them anytime we want for posterity. I need  only N2m to transfer the films to DVD. The one I saved in my plate are all burnt and wasted.

That was why I set up a movie maker’s  Hall of Films. Most countries have Hall of Films for professions. Right now, I have two galleries made up of musicians because, most of our musicians knew nothing about music. So because of this, I decided to create a hall of film for these great musicians with the caption, “Talk Music” where you can talk about music. These things are relevant but when you have nonentities, you will do nothing.

I have transferred all the films now to America when they gave me 40% discount to get all these things done. I believe these are what the government should be doing and not giving me a national honour, (OON).

What are we expecting on your birthday?

There is nothing other  than balancing in my compound and entertaining my guests with whatever my in-laws will bring for me.

Flood destroys over N15m worth of goods in Abia

A heavy downpour in Aba, the commercial hub of Abia state, South-East Nigeria, has left many homes, shops and markets submerged by flood.Goods estimated at over N15 million were destroyed by the flood.Mr. Obinna Ogugua, a trader in the market, was said…

An Ikeja High Court yesterday rendered a copy of the Department of State Security’s report to the Senate on Mr. Ibrahim Magu, the Acting Chairman of the Economic and Financial Crimes Commission, inadmissible.Our correspondent reports that Justice Doris…

The National Working Committee (NWC) of the Peoples Democratic Party (PDP) has met with serving and newly-elected lawmakers ahead of the inauguration of members of the 9th National Assembly.The meeting came barely 24 hours after the ruling All Progress…