…To have surgery on Thursday
BARCELONA (AFP) – Barcelona coach Tito Vilanova has suffered a relapse of cancer a year after surgeons removed a tumour from his salivary gland, the club said Wednesday, in a potentially bitter blow for the Spanish league leaders.

Messages of support poured in for the 44-year-old, whose team is flying nine points high at the top of La Liga after the club confirmed media reports in Spanish sports dailies.

The Catalan giants said in an initial statement that a scheduled news conference for Wednesday lunchtime with Barca president Sandro Rossell had been cancelled, as had a planned Christmas meal with the media.

They then added that Vilanova would have surgery on Thursday and thereafter also undergo “around six weeks of radiotherapy and chemotherapy,” according to a statement on the club’s website, fcbarcelona.es.

Spanish newspaper El Economista citing sources close to the club said Vilanova’s assistant Jordi Roura would take over his duties in his absence. Various media said Vilanova was due to be operated on again imminently. 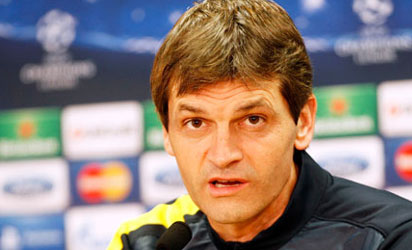 The development comes at a dramatic time for Barcelona, one of the world’s most successful football teams. They have made their best ever start to the league season, while their fierce rivals and title holders Real Madrid are suffering a malaise.

Jose Mourinho’s Real are 13 points adrift in third place and rattled by reports of internal squabbles.

“Real Madrid wishes to express all its support, love and affection for Barcelona’s coach Tito Vilanova, to whom it wishes a quick recovery,” it said. “Real Madrid extends this support to his club and all his family.”

On Twitter messages of support came from sporting figures including tennis champion Rafael Nadal who said: “All my strength and support to Tito Vilanova. We are with you to overcome this.”

Vilanova has been Barca manager since the departure of his long-time comrade-in-arms Pep Guardiola in April this year.

He underwent an operation to remove a tumour on his parotid gland — the largest of the salivary glands — on November 22, 2011 and was back at work as Guardiola’s deputy just 15 days later.

Vilanova has led Barcelona to the most successful start to a season in La Liga’s history, with 15 wins and one draw in 16 matches so far.

They rule supreme over Spain’s clubs, nine points ahead of runners-up Atletico Madrid, in large part due to Argentine talisman Lionel Messi, who has taken his tally for the calendar year to a record-breaking 90.

Vilanova played only briefly as a professional in Spain’s top flight, notably with Celta Vigo, before turning to coaching at the end of his career and finding his way back to the club of his youth.

He came through Barcelona’s youth ranks but after failing to break into the first team he continued his playing career with a number of lower league clubs before retiring in 2002.

He rejoined the Catalans as a youth coach in 2007, helping Barcelona’s B side to promotion.

Vilanova was promoted to first team duties, working alongside Guardiola, for the 2008-2009 season, by the end of which the team had won six major trophies including the Champions League.

Reports of Vilanova’s relapse emerged on the same day that a Catalan radio station and Mundo Deportivo said doctors had given the all-clear for Barcelona defender Eric Abidal to play again after undergoing a liver transplant on April 10.

The operation was conducted more than a year after a tumour was removed from his liver.

The Arewa Consultative Forum (ACF) has inaugurated four standing committees to rewire politics in Northern region and rekindle hope and justice among the populace.

The ACF Secretary-General, Mr Anthony Sani, who inaugurated the committees in Kaduna, Northwest Nigeria said the aim was to institute a new political culture of electing political leaders who would be accountable to the people.

There is the need to rewire the politics, re-engineer our sense of justice, make mercy smarter and hope, more strategic,” he explained.

Sani added that the youth who should be avatars of change must be guided to make judicious use of their democratic right and vote only credible leaders who are accountable.

This would help supplant both plutocracy and kleptocracy with democracy premised on triple foundation of justice, liberty and common decency.

The scribe recalled that the ACF had earlier formed a Think Tank, to harmonise all existing documents on Northern challenges� into a Northern Agenda’, and another committee on restructuring.

He said that the overall aim was to produce documents that would guide policy makers to discharge their responsibilities in the best interest of the people.

The committees that were inaugurated include: Research, Strategy and Planning; Political; Education, and Agriculture.

The ACF secretary general, particularly challenged the political committee to promote only issues which most northerners hold dear, devoid of partisanship, so that the region would rewire its politics, ensure justice and rekindle hope in its youth.

A member of the committee, Sen. Usman Umar, who responded on behalf of the members, pledged to deliver on their mandate and ensure that their contributions add value to the development of the region and Nigeria.

Ex-Cameroon ministers in prison for corruption

Basile Atangana Kouna, Cameroon’s former water and energy minister and other top government officials held over an anti-corruption crackdown have been shown in a video commemorating Easter in prison.Journalists tweeted screengrabs of Basile and others …

ABUJA — The Central Bank of Nigeria (CBN) has warned that commercial banks which deduct monies illegally from their customers’ accounts for products and services will be forced to refund the monies with interest.Fada David, the head of Consumer Compla…