The China-based striker is hoping to lead his country to the title in South Africa after missing out on penalties to Zambia in Gabon in the 2012 edition. 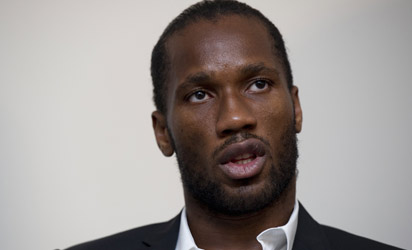 Manchester City’s Toure brothers Kolo and Yaya, the African Player of the Year, were among half a dozen players called up from the English Premier League.

The only non-foreign based name on Lamouchi’s list was goalkeeper Ali Badra.

Only six of the squad for the January 19-February 10 tournament did not figure at the 2012 Nations Cup.

Ivory Coast are preparing for the competition with a January 6-16 training camp in Abu Dhabi, with a friendly pencilled in against Egypt, who failed to qualify, on January 14.

“I’ve selected these 23 players to perform good work in Abu Dhabi and I hope that they will all be available to go the Nations Cup,” said the team’s French coach.

In South Africa, the Ivorians are drawn in Group D with Algeria, Tunisia and Togo.

The Peoples Democratic Party (PDP) has commended the Nigerian Armed forces and the sacrifices of the fallen heroes.National Chairman of the Party, Prince Uche Secondus made the commendation in a statement he issued in Abuja, to mark the 2018 armed forc…

South Sudan was at the top of the agenda as U.S. Secretary of State John Kerry met Monday with Kenyan President Uhuru Kenyatta and foreign ministers from Kenya, Uganda, Sudan, Somalia, and South Sudan in Nairobi, at the start of a three-country tour. T…

ABUJA, NIGERIA Nigerian President Muhammadu Buhari has spent more time outside of the country than in it this year.Buhari returned from London in March after being away for nearly two months, seeking treatment for an undisclosed illness. He left again …