… Contract clause may halt Ameobi’s Afcon dream
The Super Eagles will depart for Faro, Portugal today through Accra, Ghana, to begin the final phase of its camping for the Nations Cup, with head Coach, Stephen Keshi, hinting that Newcastle striker Shola Ameobi, has a contract clause that may exclude him from the Afcon Championship.

Speaking at the weekly media parley in Abuja that precedes the team’s departure, Keshi declared that he spoke to the gangling striker on Christmas day and he told him that two years ago he signed a clause in his contract that says he cannot go to the Nations Cup without the Manager’s permission. 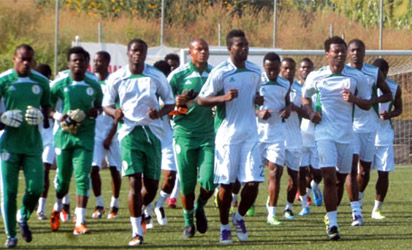 “To make matters worse Newcastle fears that Demba Ba, will be leaving the club by the January window and they need a strong strike force and with Ameobi being their most experienced player in that area we may lose him. But he has said he will talk to me on Boxing Day night and after that  I will let Nigerians know what the position is, because he wants to thrash out the issue with his Manager, Alan Pardew”.

The Super Eagles will have their last training session at the Abuja National Stadium training pitch  this morning before departing for Portugal.

All players who will not be making the trip to Portugal will be decamped same day. And Keshi took time off to pay homage to the determination and commitment of the home-based professionals during training.

“It’s a shame that we can’t take all of them to Faro, but what they have done here shows that they are true professionals and I know when we return they will be part of the set up for the next round of qualifiers in the national team”.

A militant group in Nigeria’s restive Delta region said it had attacked an oil pipeline operated by Shoreline and NPDC, according to a statement issued by the group on Tuesday.The group, which calls itself the Niger Delta Greenland Justice Mandate, sai…

A brace by Darwin Machis and a goal by Josef Martinez helped Venezuela beat Bolivia 3-1 and advance to the Copa America quarter-finals on Saturday.Venezuela, who have never won the Copa America or qualified for a World Cup, finished Group A in second p…

Some financial experts on Monday predicted that the Nigerian Stock Exchange (NSE) would witness mixed performance this week ahead of the Monetary Policy Committee (MPC) meeting and year-end rebalancing.They told journalists in Lagos that market volatil…