PARIS (AFP) – There was no festive cheer for African stars in the English Premier League with Senegalese Papiss Cisse and Demba Ba, Ivorians Arouna Kone and Yaya Toure and Cameroonian Stephane Mbia in losing teams.

Cisse and Ba had particular cause for disappointment as Newcastle scored three goals at Manchester United only to leave empty handed after the league leaders snatched a thrilling 4-3 victory.

PAPISS CISSE (Newcastle Utd)
Striker Cisse found himself the centre of controversy in his side’s thrilling 4-3 loss at Manchester United. Home manager Alex Ferguson was furious that Newcastle’s second goal was allowed to stand despite Cisse being in an offside position when Jonny Evans put through his own goal, and Cisse later slammed home to put the visitors 3-2 up, only for United to roar back in the closing stages. 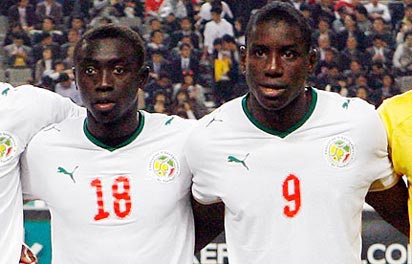 DEMBA BA (Newcastle)
Cisse’s compatriot and club-mate also played a part in Newcastle’s impressive showing at Old Trafford. The 27-year-old helped open the floodgates in the fourth minute with a rasping shot that Manchester United goalkeeper David de Gea could only palm out to James Perch, who put Newcastle in front.

AROUNA KONE (Wigan)
Ivory Coast forward Kone registered his fifth goal of the season but it was not enough to prevent third-bottom Wigan from losing 2-1 at Everton. The 29-year-old struck in scrappy fashion in the 82nd minute, poking home from close range after a high ball had been allowed to bounce in the Everton 18-yard box.

STEPHANE MBIA (Queens Park Rangers)
Cameroon international Mbia produced one of his finest performances in a QPR shirt but his side nonetheless lost 2-1 at home to West Bromwich Albion to return to the foot of the table. The former Marseille man twice went close to opening the scoring in the first half, before releasing Djibril Cisse to pull a goal back for the Hoops in the 68th minute.

YAYA TOURE (Manchester City)
It was a bad day at the office for the freshly re-crowned African Footballer of the Year, as his side went down 1-0 at Sunderland to hand Manchester United a seven-point lead. Things might have been different had Toure found the net in the eighth minute, but his meaty half-volley drew a fine save from home goalkeeper Simon Mignolet.

The Lagos State government has unveiled plans to transform some landmark areas in the state into a world class recreation and tourism centre.The construction of a brand new contemporary Museum will soon commence, as an integral part of overall strategy…

ABUJA– The China National Offshore Oil Corporation (CNOOC), China’s largest producer of offshore crude oil and natural gas, is to invest an additional three billion US dollars in its existing stakes in offshore oil and gas operations in Nigeria, says …

The Court of Appeal sitting in Ilorin, the Kwara state capital on Tuesday sacked the Ishola Balogun-Fulani faction of the All Progressives Congress (APC) in the state, believed to be fronting for Senate President, Bukola Saraki.The court thereafter aff…