The hornet’s nest was ruffled when one of Nigeria’s most gifted footballers, Osaze Odemwinge was left out of the 32 man preliminary list for the 2013 Afcon camp in Faro, Portugal. Osaze was not alone as other names like Obafemi Martins, Obinna Nsofor, Taye Taiwo, Uche Okechukwu, Chinedu Ogbuke Obasi among others were also not in Keshi’s list.

In the face of this, Keshi has shown maturity, pleading for understanding, saying that there were a lot of competitions ahead. “I can’t take everybody to the Nations Cup,” the coach said. “We still have the World Cup and a host of other competitions.”

But former Green Eagles player, Okey Isima says Keshi’s decision to drop Osaze was wrong. “He should have accommodated Osaze in the team,” Isima insisted, in a chat with Saturday Vanguard Sports. “If it was based on current form and experience, I feel Osaze should have been among the first set of invitees.” 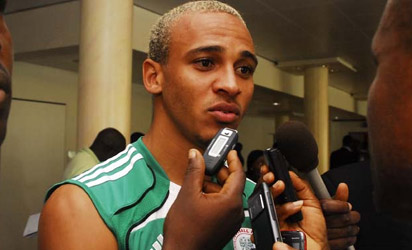 Isima would have none of the argument that the player may have been ignored because of his antecedents and poor relationship with other players in camp. “Keshi should have found a way to manage him. Despite the stories we have been hearing about him and former national team coaches, Osaze has been a consistent performer under them,” Isima argued, pointing out that, “everybody is taking his best to the Nations Cup and Osaze, to me is good enough and Obafemi Martins too is tested. They should have been in Keshi’s team to South Africa.”

He wrote off Eagles’ chances in South Africa because, “a lot of countries are going with experienced teams that have been campaigning in the Nations Cup. Countries like Cote d’ivoire, Ghana, Zambia have better chances than the Super Eagles.

“Keshi is taking a young team with very talented players to the tournament but there is a limit to what they can achieve because they are yet to blend as a team.”

Office of the Surveyors General of the Federation, OSGOF, in Nigeria has mapped out strategies to achieve its set target of generating one billion naira in to the government coffers this year.To this end, Nigeria’s Surveyor General, Ebisinte Awudu has …

The Senator representing Kano South in the National Assembly, Kabir Gaya, has commended Vice President Yemi Osinbajo for his humility and loyalty, describing him as a great leader and a close associate of President Muhammadu Buhari. Gaya spoke with Sta…