Former Nigeria’s captain, Nwankwo Kanu has stated that the Super Eagles will only win the 2013 Nations Cup if they have the belief.

Kanu, now a Nigerian football ambassador said he believes Nigeria is going there to win the cup.

“We should all believe in this, the players should believe that we can achieve it but if there thinking is to go there and say well we will be fine if we can reach the semifinal then, they don’t believe in theirselves. 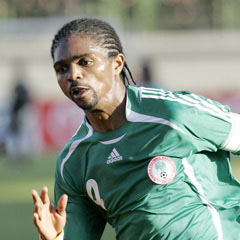 “They should see themselves as a winning team and don’t put their mind in some players that are not in the team said the two-time African Footballer of the year.”

The former Ajax star added that Nigerians should allow Stephen Keshi to concentrate by ending the arguments generated by the list of players invited for the camping.

He declared  that the former Togo and Mali coach is experienced enough and can’t choose a path to failure.

The governors in Nigeria’s governing Party, the All Progressives Congress, APC have met with the party’s National Working Committee to take stock of their performance in their states.The governor of Plateau State, Mr. Simon Lalong who stated this after…

The nomination of Mr. Ahmed Bello Mahmud as Resident Electoral Commissioner (REC) on Wednesday got the approval and confirmation of the Senate after three attempts with two previous rejections by the lawmakers.Mr. Mahmud who is representing Zamfara sta…

The UK Department for International Development (DFID), has advised Nigeria government to invest in its human capital, if it must attain it greatness.Debbie Palmer, Head of DFID Nigeria, gave the advice in his remark at the opening ceremony of an induc…