When former BBA winner, Karen Igho set  out last Friday to support her ‘crazy’ friend and ex-SoundCity presenter, Denrele who  played host at the Smirnoff party, little did she know she would end up with a swollen face.

The ‘I-don’t-care celeb’, who left the comfort of her home to party all-night, got the slap of her life, when a security guard at the party dazed her on the face because she allegedly ‘refused to give him money’. 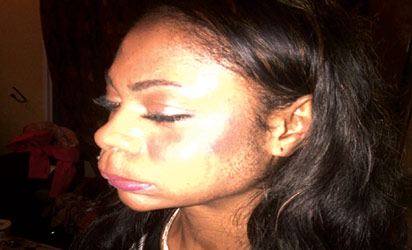 After the sad incident, Karen whose face appears swollen, took to social network, Twitter, where she kept pouring out her ‘broken’ heart at the unexpected show of shame.

“Wow I got slapped at a smirnof party by a security guard! Is it because I’m a woman?”, she tweeted.

As if that wasn’t enough, she continued, “He loaded his gun and put it to my face at the car park. Said he would shoot me if I didn’t give him money. I said I didn’t have. He slapped me!Now my face is swollen and I’m in pain!All I wanted to do was to go support my friend, Denrele who hosted the event. I feel abused and hurt. The slap sent me landing on the floor and hitting my head.”

It’s been days now since the incident happened and Karen insists she must get justice.

“My team are on this. I’ve also called my lawyer. I know I have a good heart but I won’t let this go without fighting for justice because he might do it to someone else. Thank God he didn’t shoot me.”

ABUjA– Despite the efforts of the Central Bank of Nigeria’s (CBN) to promote financial inclusion, Nigerian banks lost more than two million customers between 2016 and 2017, according to the latest statistics from the Nigeria Inter-Bank Settlement Syst…

The Nigerian Maritime Administration and Safety Agency, NIMASA has called for the assistance of the traditional rulers in the maritime domain towards the economic diversification drive of President Muhammadu Buhari’s government.The Director General of …

The Federal Road Safety Corps (FRSC) rescued 90 people unharmed in Lagos State during its Operation Zero Tolerance Patrol ” which started on Dec.18, 2017.The State Sector Commander of the corps, Mr Hyginus Omeje, gave the figure in an interview with t…