Godwin Abigor wants the Eagles coach, Stephen Keshi to consider the characteristics of African football before selecting the players he will parade at next month’s Nations Cup in South Africa.

The Warri Wolves chairman who is knowledgeable in sports said that the message Zambia sent to the world when they lifted the last Nations Cup should serve Keshi and his crew a big lesson that could help their selection.

“Keshi must avoid the mistake of ignoring the potential of local players in African football when selecting players for the Nations Cup,” Abigor started.

“From what happened during the qualifiers, Keshi himself experienced the dogged attributes of the local players and how they helped in crucial situations. It is against this background that I hope that Keshi considers the outstanding home-based players in his selection. He will need them badly. A good combination of the local players and the foreign-based players will help the Eagles. 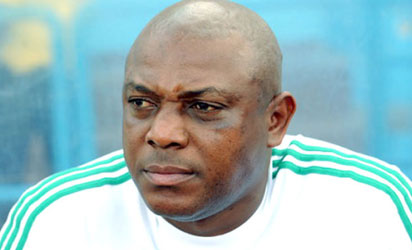 I hope that we will learn from the message Zambia sent when they won the Nations Cup with a team dominated by local players. They beat star-studded Ivory Coast. They lacked the finesse Ivorien players had but they made up with rugged play and fighting spirit.

They were very physical in their approach and that paid off. They are a great proof of how different African football is. And we have seen it all in many games here in Africa. I advise Keshi to respect the potential of local players in African football and include the outstanding ones in his team and use them well during the competition.

He will have better options if he considers them. They are hungry and will not be playing safe to avoid injuries the way foreign-based players do regularly. We have seen that some big names in European football don’t fit in properly in African football. Keshi should know better.”

Kano state Command of the Nigeria Police has arrested 24 suspects in connection with dealing in hard drugs, weaponry and armed robbery.Spokesman for the command, DSP Abdullahi Haruna hinted in a briefing at the Headquarters in Bompai, Kano state, north…

The draws for the men’s football tournaments at the 2019 Africa Games in Rabat have been completed with Nigeria drawn in Group A alongside hosts Morocco, Burkina Faso and South Africa, Sports Extra reports.The 12th African Games, which will see athlete…

The Pension Transitional Arrangement Directorate (PTAD) has vowed to ensure zero tolerance for corruption in handling of pensioners funds.PTAD Executive Secretary Sharon Ikeazor made this known on Saturday in an interview in Abuja.Ikeazor said that PTA…