President of the Nigeria Football Federation, Alhaji Aminu Maigari on Thursday in Abuja inaugurated the 2012/2013 Premier League Management Committee, charging the committee to strive to “quickly and conclusively” resolve all lingering issues in the Premier League before the commencement of the 2012/2013 League season.

He said: “For avoidance of doubt, this is a national assignment of no mean significance. The management of the top tier of the domestic League of any country has serious consequences for that nation’s football. None of the National Teams can be said to have been composed without players from the domestic League, and even those who play overseas start from the home front,” commending the members for accepting to serve the nation. 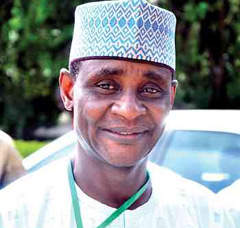 “Certainly, each member of the 2012/2013 Premier League Management Committee has been carefully chosen, based on quality of experience, broad-mindedness, capacity, proven ability, painstaking virtues, love of the game and diligence and dedication.

“Importantly, let me add that whatever issues have to sorted out must be done in line with rules and regulations, equity and good conscience. The nation is bigger than any single individual or corporate body, and it is the interest of the nation that we are talking about here.”

In his response, Chairman of the Committee, Hon. Nduka Irabor said it was an honour to be called to serve the nation, and pledged that the members would do their utmost best to redress all issues hindering the development of the Premier League.

ABUJA, The Nigerian army reported today the capture of 1,050 insurgents of the terrorist group Boko Haram, who surrendered in the general area of operations of Lake Chad and Monguno.However, the armed forces warned the communities that many others fled…

Abuja The 37th session of Expert Review Committee (ERC) on Polio Eradication and Routine Immunization (RI) in Nigeria, ends 2 days meeting but cautions that more needs to be done, to stop transmission of all types of polioviruses.Making a presentation …