Nigeria Football Federation and Spanish division two side, Villarreal have reached an agreement  to allow striker, Ikechukwu Uche shuttle between his club and the camp of the Super Eagles in Faro Portugal.

Super Eagles coach Stephen Keshi is expecting Uche to star for his team in the January 2 clash against a Catalonia side on January 2. The striker is also needed by the struggling Club to play against Barcelona B team on January 5. 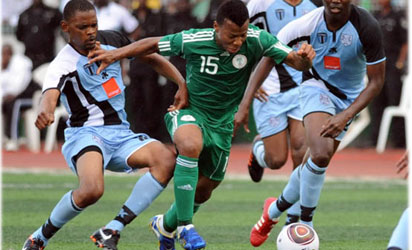 Under the arrangement, Uche will resume training with the Eagles on December 31 in Faro, Portugal and after the friendly to be decided in Barcelona, Uche is expected to travel to Villarreal for the game against the Barcelona B team.

The player is expected to rejoin the Eagles for their final preparation for the Nations Cup with a game against Cape Verde in Portugal. The team will finally leave for South Africa on January 16.

Nigeria’s opening Group C match is against Burkina Faso on January 21. Zambia and Ethiopia are the other teams in their group.

The Eagles arrived Faro, Portugal, Friday and have already started their training.

BACKGROUDSince 2009, northeastern Nigeria has been hit by a violent conflict which have led to continued large-scale displacements, disruption of basic services, food insecurity, malnutrition, and protection issues. As a matter of fact, the extreme vio…

Ongwediva-A young entrepreneur in the Oshana Region, Ancle Jayy, will launch a book that encourages youth how to venture into business.The book launch is expected to take place on March 3 at Oshakati Youth Centre in Oshana, said the aspiring author.Jay…

MFM FC of Lagos on Wednesday booked their way to the second round of the CAF Champions League with a 1-0 win over AS Bamako of Mali in Lagos.The Olukoya boys got the needed point after securing the win and going through with a 2-1 aggregate.The Fidelis…