Ameobi was named in Nigeria’s preliminary squad for the Jan. 19-Feb. 10 tournament by coach Stephen Keshi but his Newcastle counterpart Alan Pardew said this week that the 31-year-old would not be travelling to South Africa. 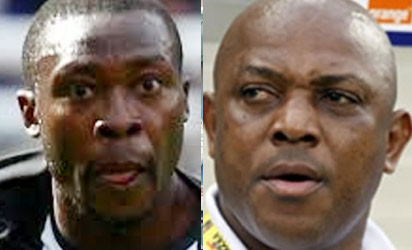 “Alan Pardew knows he cannot stop Shola from going to the Nations Cup because the competition is sanctioned by (soccer’s ruling body) FIFA,” Keshi told the SuperSport television channel.

“I don’t know what is in his head or what he is thinking about. I have never spoken to Alan Pardew in my life, I have only seen him on television.”

Pardew, who guided Newcastle to fifth place in the English Premier League last season although this term they are just five points above the relegation zone in 15th spot, had said: “Shola won’t be going.

“The national team manager knows the reasons – which I am keeping to myself.”

Keshi also reacted strongly to Kenny Jackett, coach of English second tier Millwall, who said Danny Shittu would not be going to the Nations Cup despite his defender having been named in Nigeria’s squad.

“I don’t know why the English clubs are trying to stop their players from going. Do they feel these players don’t have the right to play for their countries?”, said Keshi.

“Clubs have to understand how important this competition is.”

However, Keshi seemed to suggest he would ultimately back down if the players found themselves in an ongoing club vs country row.

“I would not want to cause any problems for any player over something like this because it is his career and eventually he will have to return to his club,” he explained.

A Catholic organisation, Justice Development and Peace Commission, has donated 410 chairs to some primary and secondary schools in Nasarawa Local Government Area of Nasarawa State.Rev. Fr. Mathew Ofoku, Coordinator of the organisation in the state, mad…

COAS calls on Nigerians to own security of the nation

The Chief of Army Staff, Lieutenant General Tukur Yusuf Buratai has urged the general public to claim ownership of the security and safety of the country in order to rid Nigeria of armed banditry and other criminal elements.The Army Chief stated this d…