Except a miracle happens and fast too, Nollywood may record yet another tragedy, following the deteriorating condition of Imo State born actress, Ngozi Nwosu.

The actress who played “Peaceful Peace’, one of the troublesome wives of Chief Fuji (played by Kunle Bamtefa) for over 20 years in Fuji House of Commotion is reportedly battling heart and kidney related ailments. For the ailing actress to stay alive, she needs the sum of N6m to treat herself abroad. And she needs it as soon as possible. 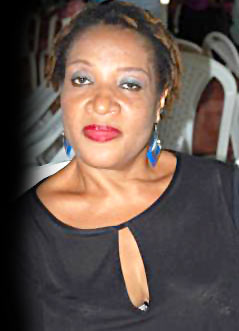 Earlier in the year, it was rumoured that the actress was infected with HIV/AIDS virus.  The once boisterous actress kept mum and subsequently went underground.

It was not until last Saturday when she reportedly appeared as a guest contestant on the popular TV game show, ‘Who Wants to Be a Millionaire’, that the picture of her ailment became glaring to all.

The actress who was a recipient of the One Million Naira that was won on the show on that fateful day to help aid her treatment was assisted by entertainment journalist, Seun Oloketuyi.

It was also ironical that Nwosu appeared on the show a few years back to play for Usman Pategi, popularly known as ‘Samanja’ and little did she know that a few years later, she will be on the hot seat playing to raise funds for herself.

According to Oloketuyi,  “One of the first signs that things were no longer right with Ngozi was the fact that we had to delay recording because while everybody else was virtually fanning themselves due to the studio lights, Ngozi was shivering from cold so much that the producers had to get her cardigans. I was flustered. When the programme eventually got underway, Ngozi still helped to answer some questions.”

Narrating further, Oloketuyi said, he was invited to participate in the game show and had no inkling that the actress was going to be his partner. The Director only informed him few minutes before recording began when Nwosu sauntered in.

“When we probed further on what exactly her ailment is, Ngozi wouldn’t say but instead invited me to her home. Last Sunday, I was Ngozi’s guest, where she showed me results of tests stating that she had kidney and heart-related issues. I spent hours in her house as she led me by the hand through the whole gamut of her illness.

“She told me she decided to divulge everything because of widespread speculation that she was HIV positive. “I don’t have AIDS o,” she declared.

Also, few weeks ago, the National Association of Nigerian Theatre Arts Practitioners (NANTAP) rallied around the ailing actress  when they had to raise some amount of money to support her.

Since the beginning of this year, Ngozi  has been a shadow of her old self as she emaciated with her collar bones standing so glaring ahead of what used to be a robust neck. Her failing health was however linked to so many unimaginable things, but the “Fuji house of Commotion” star was unperturbed. She maintained that nothing was wrong with her.

Muslims have been asked to increase their investment in the upbringing of their children, to ensure a more prosperous society and better secured future.Islamic scholar Sheikh Mohammed Bn Yahaya made the call in Sunday when he delivered a lecture at the…

MR KHAN: Can I thank you all very much for coming to this town hall meeting at the best town hall in the world, city hall. This is my living room, and I’m really pleased that we have the U.S. Secretary of State John Kerry in city hall today. And Secret…