Like the previous years, the out-going year, 2012 is a year of the good, the bad and the ugly in Nollywood. A year full of intrigues, heartbreaks and tears, some practitioners got married, sealed endorsement deals, won awards, premiered hit movies  and welcomed new babies  among other good things. But above all, the industry lost some of its veteran actors to the cold hands of death.

At the maiden edition of Monalisa Chinda’s “A Dance for Life” dance-drama project staged at the Oriental hotel, Lekki, Lagos, during the week, HVP spoke to some top Nollywood practitioners on how the industry fared in 2012  and their expectations in the coming year. This is what they have to say…

Nollywood in 2012 was very wonderful. Though there was the good , the bad and of course, the ugly side of the year. A lot of good things happened to the industry this year; new great movies hit the cinemas and the industry made a lot of gains. But the bad side is that the industry is still in comatose, it is yet to get to where it’s supposed to be. For the ugly side, we lost many veteran actors this year; Enebeli Elebuwa, Peter Eneh…

The coming year will be the best year ever for the industry because a lot of things have been put in place by the practitioners. I believe that those things will help to take the industry to the next level. 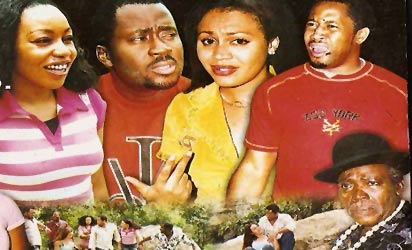 I think, it’s a wonderful year for the industry. We have some great movies that were box office hits. Academically, I wrote a book this year, on Nollywood, the first of its kind. Also, in the area of event organisation, practitioners are beginning to realise that they too can be part of it. We saw the Monalisa Chinda’s Dance for Life project, Fred Amata’s Christmas dance drama production and Chico Ejiro’s Nollywood party. It’s an exciting year and I hope that we can maintain this tempo in the coming year
.
Lancelot Imasuen, Director/producer:

The outgoing year saw the practitioners veered into other areas of art. This development further stretched my imagination. The stage remains the father of all entertainment, and Nollywood seems to limit what the practitioners can do on stage. I’m so happy that this kind of ideas are going to further boost our morale first and foremost as artistes, and secondly, as entrepreneurs.

The outgoing year has been rewarding for the industry in terms of investment and production. A lot of great movies hit the cinemas this year. I want to see the industry move forward in 2013.  There are so many big-budget projects in the offing. The industry will take a new shape in the coming year.

It was an eventful year. And it witnessed what I would call beautiful ending. The number of films churned out from Nollywood may have dropped, but the industry witnessed more activities this year. Apart from film making, I think, the practitioners have realised that there are other genres they can delved into.

Today, some practitioners are columnists in some major newspapers and  soft-sell magazines.  The coming year holds a lot of promises for  the industry. Looking at the previous years, the practitioners were almost doing the same thing in terms of scripting, directing and producing, but today all that have changed. They are beginning to branch into other areas of art which is a good development.

In all, it was an eventful and  a sad year. Even though, we did not access the much talked about N200 million government intervention fund for entertainment, the year was harvests of accomplishments.

A Kenyan MP has been arrested for allegedly slapping a female colleague because she did not allocate money to his constituency.Rashid Kassim is accused of slapping Fatuma Gedi, who sits on the budget committee, in the capital Nairobi.A photo of Ms Gedi…

Activities in the equities segment of the Nigerian Stock Exchange were little-changed on Thursday, March 23, as investors weigh the implication of the decision of the Monetary Policy Committee to retain rates.The market capitalisation of the listed equ…