The story was splashed everywhere, virtually every gossip blog and dedicated entertainment news websites reported this story; Don Jazzy was said have purchased a N160 million home in the prestigious Nicon Estate in Lekki, Lagos, a story that Don Jazzy now calls a lie!

Vanguard had not reported this story as we awaited confirmation from Don Jazzy who has now spoken through a representative “Yes, Don Jazzy bought a house recently but not the reported one at Nicon Estate. That is not Don Jazzy’s home. ” 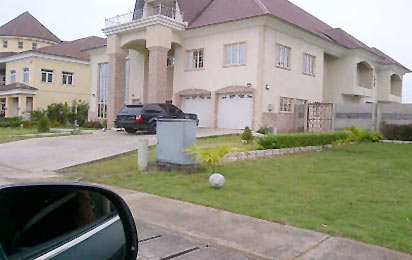 This is not the first time Don Jazzy has stepped out to refute stories about him that had gone viral. In May, shortly after the very popular break up with former business partner D’banj, there had been claims of calls and interviews from bloggers and reporters that the ace producer had reacted severally to D’banj’s interviews on the break- up and just like this one, the gist had gone viral. Don Jazzy had told Vanguard’s now late group entertainment editor Ogbonna Amadi

“I have seen different kinds of interviews and blogs and whatever that people have written and they say that they spoke to me.

Could that be true? (Amadi asked)

Yes, they are not quoting anybody they were quoting themselves may be they have one imaginary Don Jazzy they were talking to or the other because the Jazzy they quoted is not me, I really do not speak to anybody regarding any situation or any issues, I have not put out any press statement saying whatever on this issue so people just really assumed. They were quoting themselves.”

Fatima Mohammed fled from Rann more than three months ago when insurgents attacked her village of Kalabargi. Bussed by the military to Maiduguri, they settled in Gubio Camp, just on the outskirts of the city. Since nearly the start of the year, Fatima …

Vice President Yemi Osinbajo, at the 2017 Nigerian-American Chamber of Commerce SMEs Conference media chat, said that the economic diversification in Nigeria is taking root while commending regulatory agencies. He said the government is getting positiv…

The US has unnerved the world oil market by ramping up the pressure in its long-running dispute with Iran. It has announced that, after May 1, it won’t renew the exemptions given to eight countries that enable them to buy Iranian oil. Those affected, w…