Rihanna and Chris Brown’s relationship is certainly complicated but, for now at least, it’s game on.

The Diamonds singer, 24, left Barbados to spend Christmas Day with the R&B performer, 23, in Los Angeles. 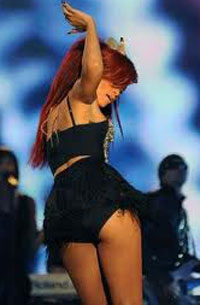 The pair were spotted cuddling and flirting at the Staples Centre while watching the LA Lakers take on the New York Knicks.

Rihanna was all dressed up for the occasion, wearing a black midriff-baring outfit, heels, gold choker necklace and red lipstick.

She sipped beer from a plastic cup and seemed in good spirits as the pair kept close during the game.

They were among a host of famous faces in the crowd, including Snoop Lion and Red Hot Chili Peppers star Anthony Kiedis.

While she didn’t comment on her romantic Christmas on Twitter, she posted appeared to be an old picture of herself wearing Santa hat and fatigues while with friends.

She wrote: ‘Santa baby! Hurry down the chimney tonight! Is it too late to be nice?’

Rihanna checked out of the Barbados home she had been renting in recent weeks on Christmas Eve and flew straight to California. Her visit to her native island was not without drama – police were called to the property when a man was found trespassing over the weekend.

Police in Barbados have since confirmed that the man – believed to be a German national – mistook the private home as public property. He wasn’t arrested.

The volatile couple reconciled earlier this year even though Chris is still on probation for beating her up in 2009.

A one-time Editor of the Sunday New Nigerian Newspapers, Kaduna, Aliu Babatunde Ahmed, popularly called A. B Ahmed is dead.He died in the early hours of Tuesday at the age of seventy four during a brief illness at his Idi Ayan residence, in Ilorin, the…

Governor-elect, Emeka Ihedioha, has said that the Imo State Governor, Rochas Okorocha has not released a dime for his swearing-in on May 29.Ihedioha, who spoke in a statement issued by the secretary of his inauguration and handover committee, Ray Emean…

Kenya for $2.5b third sovereign bond

Kenya is planning to launch its third sovereign bond worth $2.5 billion, but the East African country requires the assistance of a financial consultant to advice on the timing, pricing and viability.The government is seeking the loan to finance its ope…