Fans of the talented actress,Rukky Sanda are actually left with no option than to question the source of income to this Nollywood actress as she was spotted recently with a car worth, N35M. 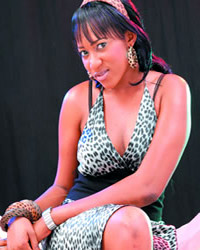 The fans are a bit confused as  if their Nollywood star, who has not had one endorsement in her career, is living flamboyantly apart from the money she’s making as an actress or she’s just doing some dodgy business by the side to have acquired a N35m latest Range Rovers known as Evogue. The not-too-fantastic an actress, Rukky has just joined the clique of Nollywood actresses with Range Rover SUV.

If you remember, for sometimes now, the actress has not appeared in any movie neither has she done anything to have earned her such a ride. The question now is,how did she get this kind of money to spend like this?

President of the Nigerian Senate, Dr. Bukola Saraki, says the focus of the 8th National Assembly is to pass legislation that will have the highest value on Nigerians.

Senator Saraki made the remarks during a dialogue session to mark the first anniversary of the National Assembly Business Environment Roundtable (NASSBER) held in Abuja on Monday.

Also, experts, international development partners and critical stakeholders in the country’s economy, lauded the National Assembly for the NASSBER Initiative which has resulted in a novel synergy between the legislative arm of government and the private sector in ensuring that the nation’s business environment is competitive enough to guarantee profits and attract of investors.

He noted that for the first time in the history of the country, the National Assembly, in partnership with the private sector, through the NASSBER, initiated a research study to review the legislative instruments impeding doing business in Nigeria and received a report detailing the necessary legislative action required to begin the process of changing the unsupportive legal structures, weak institutional base and obsolete regulatory frameworks in the nation’s business environment.

We want to see that these bills can actually help us create jobs, mobilize private sector investment and promote made in Nigeria goods. We would expect that the breakout sessions will offer us a new set of legislative interventions that will help further to cement the impact the first tranche of our work is having.

The Senate President thanked the Nigeria Economic Summit Group (NESG), Department for International Development (DFID) and the Nigerian Bar Association � Section on Business Law (NBA, SBL) for their steadfastness and commitment to the vision and purpose of NASSBER, which is to facilitate constructive engagement and collaboration between the National Assembly and the Private sector.

Speaker of the House of Representatives, represented by the Deputy Speaker, Yussuf Lasun, noted that the NASSBER initiative was a right step in the right direction towards the enhancement of the economy.

According to him, A little over a year ago when NASSBER was inaugurated, we were very confident it was the right step to take if we were indeed committed to bringing our economy out of recession, and stimulating long term economic growth that is inclusive and sustainable for the shared prosperity of all Nigerians.

For the National Assembly, it was a road not travelled before, but we were willing to embark on this journey, not minding the risks, considering the promises it held. Looking back the last 12 months, NASSBER is but a success story of novel synergy, dialogue and engagement between the legislature, development partner, the private sector, the bench, and citizens.

The National Assembly will continue to play a central role not only in governance but also ensuring that we deliberate and act on frameworks that will improve Nigeria’s business environment through the review of relevant legislations and provisions of the constitution.

As a result of this effort, I am more confident that our economy would attract agile private sector that can innovate and respond to global opportunities, as contemplated in the Economic Recovery and Growth Plan (ERGP) of this government, he said.

The Country Head, UK Department for International Development (DFID), Mr. Ben Mellor, represented by the Mr. Richard Ough, Head of Economic Development Team of DFID, noted that he was pleased to have been part of the success story of NASSBER.

Mellor said, I’m pleased with the progress that NASSBER has made in its first year. This progress is encouraging and sends positive signals about Nigeria’s direction of travel. The UK is delighted to have been a partner with the National Assembly on this.

But even beyond NASSBER, the cooperation that we have seen between the National Assembly and the Presidential Business Environment Counsel (PBEC) has been excellent, and it is clear that this important collaboration will be critical in getting even further in the next year.

He said that the UK remains committed to its partnership with the National Assembly, the Executive and the Private Sector in helping Nigeria make progress in business environment reforms, We look forward to an even more successful next 12 months. We wish you a fruitful deliberation here today, he added.

Mr. Bukar who was represented by his deputy, Asuen Ighodalo, added that the success of NASSBER in the last one year is evidence of the determination and commitment at the highest levels of government.

For the first time in our nation’s recent history, all arms of government are working assiduously with other stakeholders towards enhancing the country’s economic growth and laying a strong foundation for sustainable development.

This is no doubt a systematic approach to reforms and we are confident that it is critical to dealing with the problems faced by the private sector. There could not have been a better way of navigating the complex web of policy, legal, institutional and regulatory conditions that govern business activities in Nigeria.

President of the Nigerian Bar Association, Abubakar Mahmoud, SAN, who was represented at the event, commended the leadership of the National Assembly especially the Senate President and Speaker of the House of Representatives, for the unprecedented collaboration with the private sector and development partners to bring about ease of doing business in the country.

High point of the event was the panel discussion on Legislative Interventions to unleash economic opportunity for local manufacturers, the inauguration of the NASSBER Steering and Technical Committees, Working Group and the launch of the NASSBER Annual Report by the Senate President. Others include a key note address on Exploring the contribution and impact of NASSBER to business and the Nigerian economy delivered by Dr. Doyin Salami.

Cameroon says it has deployed additional troops to Bamenda several hours after armed separatists blocked access into and out of the northwestern English-speaking town, attacking buses and passengers.At least 20 passenger buses are still lined up at Aku…

The National Orientation Agency and the Nigeria Union of Journalists, Kwara State Journalists have organised a seminar to remind journalists of their key role in the coming 2019 general elections.They have been encouraged to put professionalism above p…