It was a strong  statement on Who is Who in Nollywood as stakeholders, Heads of Guilds and Associations as well as major Nollywood players gathered at the exotic Zenith Water Margin Chinese Restaurant in Surulere penultimate Wednesday to celebrate the industry at 20. 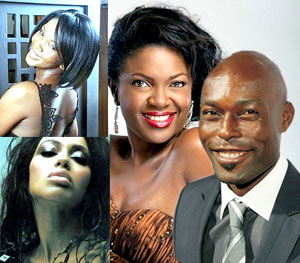 The purpose of the historic gathering was the presentation of the programmes for Nollywood at 20 to the stakeholders and Heads of Guilds. The impressive gathering inspired by  AMP president, Zik Zulu Okafor had met in the same venue in April, this year,  to exchange ideas.

They agreed that it was laudable and a think-tank comprising Fidelis Duker, Zeb Ejiro, Fred Amata, Okey Ogunjiofor, Zik Zulu Okafor, Victor Okhai and Francis Onwochei was set up to develop an agenda for the celebration. A communication expert and Chief Executive of HQSC, Nnanke Harry Willie later joined team.

At the event, the stakeholders expressed delight over the envisioned celebration and called for the mobilization of all the artistes in Nigeria for the great event.

They condemned the recent attempts of Nollywood practitioners to fragment the industry by forming rival guilds and called for unity in Nollywood and transparency in the management of the celebration of Nollywood at 20.

AMP President, Zik Zulu Okafor, who anchored the event, urged stakeholders to ensure that the celebration is a re-enactment of FESTAC 77 if not surpass it. He listed Thisday and Vanguard Newspapers, Nigeria Television Authority and DSTV as potential partners for the celebration.

IKEJA An Ikeja High Court will on April 18 rule on the admissibility of a report by the Department of State Services (DSS) to the Senate on Mr Ibrahim Magu, the Acting Chairman of the Economic and Financial Crimes Commission (EFCC).The News Agency of …

The Nigerian National Petroleum Corporation is to build a 500 million standard cubic feet of gas per day metering plant, to serve the planned capacity expansion of Egbin Power Plant from its installed capacity of 1,320 Megawatts to 2670MW. The Managin…

Direct savings from yearly appropriations of Ministries, Departments and Agencies (MDAs) on the Integrated Personnel and Payroll Information System (IPPIS) has grown to over N100 billion.The Minister of Finance, Mrs Zainab Usman said this on Tuesday in…