Whether you believe it or not, Tonto Dikeh is the most controversial actress who rocked Nollywood in the outgoing year.

A product of Next Movie Star,  Tonto Dikeh since she hit the limelight few years ago has never seized to be at the centre of controversy. The outgoing year is no different. 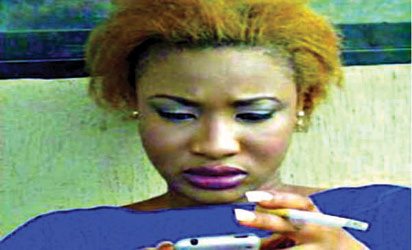 Her controversial lifestyle became more glaring this year judging from most of her unbecoming exploits. After the noise generated by her new tattoo last year, Tonto continued with her  ‘wild lifestyle’,stepping on people’s toes and damning her critics.  Her newly released singles, Hi and Itz Ova, did not help matters even though the singles became two of the most listened and downloaded tracks, with over 500,000 views.

Dikeh, who joined the bandwagon of other actors who succumbed to the moonlighting itch to delve into music, was lampooned and criticised by her fans for the uninspiring singles. Yet, she was not deterred. While she was battling to find her feet in the music circle, her foes romantically linked her to  the Kukere crooner, Iyanya who squealers said was seeing Ghanaian leggy actress, Yvonne Nelson. For  Iyanya and Tonto Dikeh it was all about who has left who for who.

However, this whole saga began when Yvonne Nelson took to the internet to vent her feelings after Iyanya dumped her for Tonto Dikeh. The drama continued unabated until Tonto Dikeh replied Yvonne’s tweet and the two actresses took their rivalry to Blackberry messenger (BBM) where they threw ‘nasty’ insults at each other.

Adeboye to Fayose: We Appreciate Your Courage in Defending Your People

The National Information Technology Development Agency (NITDA) has said that it would partner with the Economic and Financial Crimes Commission (EFCC) to sustain its fight against corrupt practices on IT procurement of Government Ministries, Department…

Onitsha-In a bid to tackle incidences of juvenile inmates with petty offences, National Human Rights Commission (NHRC) has waded into cases involving some inmates in Anambra. The cases involve no fewer than 523 inmates in Awka and Onitsha prisons. The …