Beautiful fireworks followed when the event came to an end at the Event Centre in Asaba. It was close to midnight on Tuesday. The ecstasy was such that many of the athletes hit the road, running home in celebration. Some cars that stopped to help some home were ignored. It was excitement galore.

The rewards Dr. Emmanuel Eweta Uduaghan had just announced for winning the 18th National Sports Festival in Lagos inspired a jolly marathon and Delta athletes joyfully raced home, some awake all night in anticipation of the windfall.

Their governor had announced a reward of N400,000 for all bronze medalists, N600,000 for all individual silver medalists and N1m for each gold medalist. Coaches and Secretaries who produced gold medalists equally got N1m each. Delta Queens who also won the Super League also got N1m each. Those who participated but did not win anything got N50.000. The hall erupted in wild jubilation. 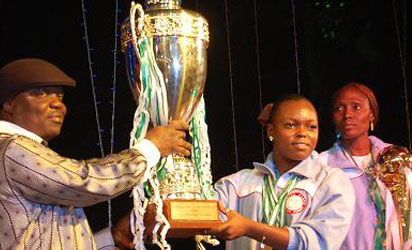 Uduaghan paid glowing tribute to athletes for their hard work. He commended their sports officials led by Amaju Pinnick for a great job. His speech was inspiring and Yakmut Alhassan who represented the minister repeatedly called him a pace setter.

“Delta is undoubtedly the best in sports development and this man is a pace setter,” Yakmut continued, insisting that this reporter strongly noted the points when Uduaghan said “it’s absolutely important to secure the future of athletes so that their labour while active will not be in vain when they retire.” Delta employs their athletes so that in retirement they would be entitled to pension. Uduaghan also announced automatic employment for all gold medalists and some outstanding silver medalists.

“It’s unfortunate that some Nigerian athletes who were once heroes and adored when they were competing cannot pay their rents and even find it difficult to survive when they retire. We don’t want that in Delta and that’s why we secure their future,” Uduaghan said as ovation continued.

He said that the state would strategize to win the next sports festival and sent a word to President Goodluck Jonathan that Delta would produce an Olympic gold medalist for Nigeria soon.

Musicians and comedians entertained in the night although Uduaghan said the ceremony could have been bigger but for the helicopter crash that claimed the lives of four people including Patrick Yokowa, Kaduna State Governor and Azazi, the former National Security Adviser. A minute silence was observed for them.

Cash transactions in Lagos State increased by N5bn especially in the creative sector in the last three weeks.The huge December 2017 spending in the state’s economy is unconnected with the peak in entertainment activities and influx of people from neigh…

The Ogun Police Command says the footballer that was killed on Saturday was knocked down by a hit-and -run driver and not by a policeman as widely reported.The state Police Public Relations Officer Abimbola Oyeyemi made this known in a statement made a…