PERTH, Australia (AFP) – American Venus Williams gave her comeback hopes a boost with a win at the Hopman Cup in Perth on Sunday.

Williams beat the 60th-ranked Chanelle Scheepers in three sets to help the United States post a 2-1 win over South Africa in their Group B tie at the mixed teams tournament.

Although Kevin Anderson levelled the tie for South Africa with an upset win with over fellow big man John Isner in the men’s singles, the Americans prevailed in straight sets in the deciding mixed doubles.

Williams, playing for the first time since October and just 24 hours after arriving in Australia, made a slow start against Scheepers but steadied to win 4-6, 6-2, 6-3. 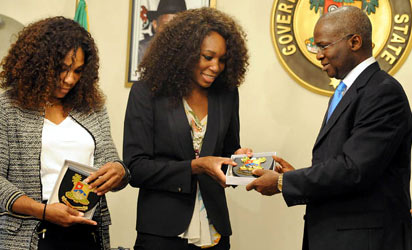 File photo: Lagos State Governor Babatunde Fashola presents the emblem of the state government to US tennis stars Venus (C) and Serena Williams during a visit at the Government House in Lagos October 31, 2012. AFP PHOTO

The seven-time Grand Slam singles winner has climbed the rankings this year as she recovered from a major setback due to illness in 2011.

Williams has not won a Grand Slam singles title since her 2008 success at Wimbledon. She slipped to 134th in the rankings last year after suffering from Sjögren’s Syndrome, a systemic autoimmune disease.

However, the 32-year-old has enjoyed much better fortunes this year.

She won her first singles title since 2010 in Luxembourg, teamed with sister Serena to win gold in the doubles at the London Olympics and finished the season ranked 24th in the world.

Speaking after hitting 44 winners in disposing of Scheepers, Williams said this year was a great platform for the coming 12 months.

“Last year was so awesome for me, winning a tournament and getting to the Olympics and getting a gold,” she said. “I was extremely happy last year and moved up quite a few spots.

“This year is just about building on it and continuing to play deep into the draws and put myself in positions to play well deep into the tournaments.”

Williams, who had to come from a set down against Scheepers, said she still believed she could be a force in the Grand Slams.

“I always feel that way,” she said. “That’s how you have to feel, you have to be positive.

“I try to be positive and tell myself I’m the best now. It doesn’t happen every time but you’ve got to have that mind frame.”

The Americans dominated the mixed doubles to win 6-3, 6-2.

Meanwhile, Germany’s Andrea Petkovic has withdrawn from the tournament after injuring her right knee during her singles match on Saturday.

The Wife of Kaduna State Governor, Hajia Aisha Ummi El-Rufai has urged the government to set up special courts for the trial of rapists. While making the call in Kaduna, she said the increasing cases of rape in Nigeria are quite alarming. In an interview with Voice of Nigeria’s Correspondent, Mrs El-Rufai said the special […]

Veteran coach, Faouzi Benzarti, is to return for a third stint in charge of Tunisia’s national team, 24 years after his first and after agreeing to a two-year contract, the Tunisian Football Federation said on Sunday.The 68-year-old leaves African cham…