Nigerian airlines open shops with funfair and before the traveling public gets to settle  down to enjoy the services of these airlines, they are out of business. What could be responsible for this inability of Nigerian airlines to hold their own in the aviation market? Many aviation analysts have tried to proffer solutions to the above problem, but these solutions seem not be enough to address the anomaly.

Some of these airlines folded up due to fatal crash, while others died or suspended operations due to management incompetence or financial stress. Among those that closed shops due to fatal crash are Bellview, ADC, EAS, Sosoliso and recently Dana Air. Others that died due to management and financial problems are Chanchangi, Slok, Savanna,Triax. Air Mid West, Oriental, Dasab, Albarka, French Air, Okada, Space World, Harka and Harco and recently Air Nigeria.

The worry over Nigeria’s aviation sector is not restricted to Nigeria, but the international community is also worried as financial institutions and international lenders now view the nation’s aviation industry with caution. Since the final collapse of Nigeria Airways following a prolonged coma, Nigeria has not had a national carrier.

Currently, Nigeria has three airlines doing uninterrupted schedule flight, while two others have flight operations  not too stable. The three that are operating daily are Arik Air, Aero Contractors, and IRS. The two that are doing complementary flights are Overland, and Associated Airline. Few weeks ago, a new airline, Med-View Airline, entered the daily flight operation market. Though Med- View has been involved in yearly air lift of Muslim pilgrims to Mecca, Saudi Arabia, it is, however, too early in the day to know how it will fare.

Arik Air, though relatively new, and has its own challenges, ranks as the biggest airline in the country today and the fastest growing airline in West Africa. Aero Contractors is the oldest airline in Nigeria. It started operations in 1959 and has worked closely with the Nigerian oil and gas industry before venturing into scheduled domestic operations in 2002. IRS and Overland are over 10 years old and still in business despite having very few aircrafts.  The Associated Airlines has also been in operation for 25 years despite the turbulence in the industry.

Air Nigeria, formerly Virgin Nigeria, was established in 2004 when the federal government and Virgin Atlantic Airways signed a Memorandum of Mutual Understanding on its take off. The airline, then trading as Virgin Nigeria Airways, started operation on June 28, 2005 with flights to London. It suspended operation recently. The chairman, Mr. Jimoh Ibrahim, had said in a statement that it was “difficult to continue further investment in the carrier with the high level of staff disloyalty and weak business environment.” Ibrahim further said “Corporations are like individuals, who naturally will get sick, and the usual thing to do is to admit them to hospitals, either for corporate surgery or for treatment, as the case may be.”

Okada Air was founded in 1983 and ceased operations in 1995 due to lack of finance and proper management. Attempt was made some years ago to revive the airline, but this never came to fruition. 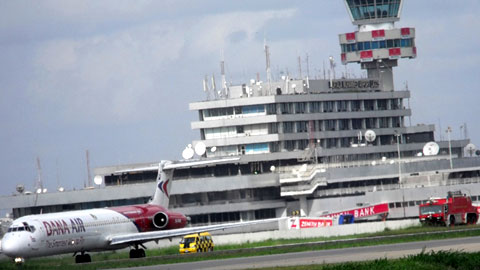 EAS Airlines was owned by Captain Idris Wada, the incumbent Governor of Kogi State. The carrier was established on December 23, 1983. It began operations as EAS Cargo Airlines, but stopped cargo flights in January 1992 and set up an executive jet charter service under the name Executive Airline Services, EAS, in November 1993.On May 4,2002, EAS Flight 4226, a BAC One-Eleven 500 twin-engine jet crashed into houses upon take-off from Mallam Aminu Kano International Airport, killing 75 passengers and crew members on board as well almost 70 persons aground. The airline was eventually sold to Chairman of Global Fleet, Mr. Jimoh Ibrahim, who changed its name to NICON Airways, which operated for a few weeks before its demise.

Chanchangi Airlines, once regarded as the biggest carrier with over 60 percent of the traffic, was established on May 2, 1997 by Alhaji Ahmadu Chanchangi and started flight operations to and from Kaduna, Lagos, Owerri, Abuja and Port Harcourt.  By 2006, signs that all was not well with the airline became obvious as the carrier’s fleet reduced from 12 aircraft to five, and later to two. In 2010, the airline’s fleet dropped to one as it was hit by financial crisis and alleged poor management.

Aviation Development Company Plc, ADC, started operation in December 1984. In 1990 the company set up ADC Airlines, which became operational on January 1, 1991. In 1994, it was listed on the Nigerian Stock Exchange (NSE).The airline was involved in a fatal crash which marked the end of the airline.

In 1992, Bellview Airlines emerged out of Bellview Travels Limited, a Lagos-based travel agency. In 1993, it started scheduled domestic passenger services with a leased Douglas DC-9-30. Bellview Airlines suspended operations following the suspension of its London Heathrow services. It eventually died when it was involved in fatal crash .

Sosoliso was less than six years old when it had a crash in 2007 in Port Harcourt, Rivers State, killing school children and others on board.

Slok, owned by a former Governor of Abia State, Orji Uzor Kalu, only flew for a few months before its operating licence was withdrawn for allegedly violating safety rule. The carrier, however, attributed its problem to the face-off between its promoter and former President Olusegun Obasanjo during the run-up to the 2007 elections.

For others like Chanchangi, Albarka and Savannah, government’s policies in the aviation industry are believed to have caused them incalculable damage. Albarka even went to the Stock Exchange and was listed before its demise.

Albarka and Savannah had BAC 1-11, B737-200 dominating their fleet, but the crash of EAS plane in Gwamaja near Kano in 2002, killing the then Sports Minister, Ishaya Mark Aku and all other passengers, forced the government to bar the aircraft type. This policy also affected Chanchangi Airlines, which was left with only three airplanes after the policy grounded the other aircraft.
The big question is why it is difficult for airlines to survive in Nigeria. Analysts who spoke on the development attributed most of the problems faced by the airlines to managerial incompetence and policy inconsistency.

President of the Aviation Round Table, ART, Captain Dele Ore believes that the policies in the aviation industry are not enduring. He added that government does not allow the managers in the industry to do their job. The former pilot with the defunct Nigerian Airways said “I am going to start simply by recalling that in the last 52 years, we have had 34 ministers in the aviation industry and if we want to do a little bit of mathematics, it is merely one minister for every 18 months. What kind of policy can you put in place that could be enduring, it cannot endure and that is the bane of the industry. The industry would have been doing much more better, but we don’t allow managers to do their job’’

Captain Ore further said the biggest disservice that the government did to aviation was the liquidation of Nigerian Airways, pointing out that since then it has all been motion without movement .According to the ART boss, since the liquidation of Nigerian Airways which was in the first generation of airlines in the country, airlines in the private sector have been coming up and dying one after the other, even up to the present third generation where we had about twenty eight airlines but they all dwindled to only about four or five functional airlines at the moment.

“The first and most disastrous disservice that we did to aviation was the liquidation of Nigerian Airways; aviation has not being the same since then. So that was the beginning of problem for aviation because by the time you killed Nigerian Airways, so many other things died with it. That was when training also stopped, developing manpower stopped and if you don’t have a continuous stream of man power to replace aging ones, that is a source of problem.’’

Tukur criticised airline owners for diverting funds meant for the smooth running of their businesses into what he described as frivolities. “If you operate an airline and make money but have nothing to show for it, then, there is problem. Most times, the owners take money from the airlines and divert into non-profit-making ventures. They come into the sector, owe the Nigerian Airspace Management Agency, NAMA, the Federal Airports Authority of Nigeria, FAAN, and the Nigerian Civil Aviation Authority, NCAA, heavily and disappear into thin air.”

Nigerian government is to intensify efforts in the industrialization of the country.The Secretary to the Government of the Federation, Mr. Boss Mustapha who stated this in a message at the 2018 China Nigeria Production Capacity and Investment Cooperati…

The Federal, States and Local Government shared N714.8 billion as revenue generated in July which shows a decline of N107.1 billion when compared to what was generated in June.The Minister of Finance, Mrs Kemi Adeosun while briefing journalists in Abuj…