Olympian, Christopher Ossai has rated the standard of boxing showcased at the recently concluded 18th National Sports Festival tagged Eko 2012 low, saying the reason was because all the boxers were  rusty owing to the dearth of competitions to keep them on.

“The quality of boxers to me was regrettably low, deplorable and despicable,” he said.

Ossai, who is the chief boxing coach of Delta State Sports Commission, pointed to the fact that “boxers had long gone rusty because the last time they were in a competition was in 2011 during the 17th National Sports Festival in Port Harcourt. If we take that into account,it is practically impossible to get boxers fighting fights that matter in a competition as the festival.” 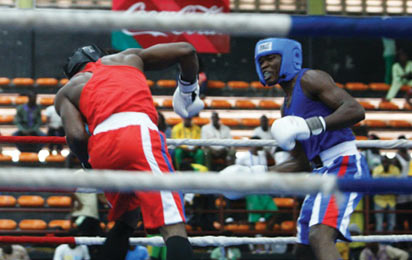 Besides, the  Los Angeles ’84 Olympics veteran pointed out that poor officiating and favoritism took the shine off boxing.

“As the only event we had in 2012, we all agreed to give it the best, use the festival to have fun. The  first surprise that struck us was the various reports from states about lack of preparation. We learned that some state boxers and coaches were given gloves and head-guards about a week to the festival besides the fact that states did not have boxing rings,” he disclosed.

Ossai however, said there is still hope for boxing to thrive as he urged administrators of the sport to plan better in 2013.  “If we can have three or four competitions of different classes in a calendar year and equipment provided to allow boxers train under conducive atmosphere, the boxers will pick up in no time,” he concluded.

In its efforts to improve the health of its citizery the Nigerian government has called on all stakeholders to come together to provide water and sanitation facilities to Nigerians.The Nigerian Minister of Water Resources Engr Sulieman Adamu made the c…

The Attorney General of the Federation(AGF) and Minister of Justice in Nigeria, Abubakar Malami has urged Judiciary Correspondents in the country to avoid fake news and hate speech in the course of discharging their duties. The AGF made the plea in Abuja while inaugurating newly elected executive officers of the National Association of Judiciary Correspondent […]