The words ‘youth’ and ‘restiveness’ have become so commonly used together in the last couple of years that it seems to have taken on a life of its own. In the last decade and more there has been a proliferation of cases all over the country and indeed the world, of youth agitations which have tons of people dead and valuable infrastructure as well as personal properties lost and destroyed.

A sustained protestation embarked upon to enforce a desired outcome from a constituted authority by an organised body of youths, fits the label of youth restiveness. It is also a combination of any action or conduct that constitutes unwholesome, socially unacceptable activities engaged in by the youths in any community.

It is a phenomenon which in practice has led to a near breakdown of law and order, low productivity due to disruption of production activities, increasing crime rate, intra-ethnic hostilities, and harassment of prospective developers and other criminal tendencies. 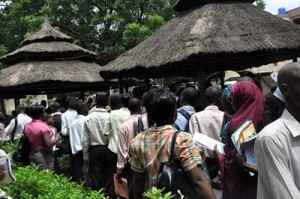 This scourge has been around for a long time and it looks as though it is defying solutions. Maybe the question that needs to be asked is what is truly responsible for this expression of dissatisfaction by the youth? Have their complaints over the years not been heard or attended to? Is there more to the killings and destruction than just drawing attention to the needs they want met? Are the youths trying to draw society’s attention to themselves more than the issues they appear to be fronting? These and more are the questions we would try to tackle head on today.

In Nigeria for instance, the Niger Delta region which is unarguably the bedrock of the oil industry in Nigeria permeated the news for a lengthy period of time as the youths of that region tried various means of getting government and oil companies to pay attention to their  dire conditions of living and alleviate their sufferings since according to them, the resources which is building the nation is flowing from their land so by virtue of that they should also be partakers of its benefits.

This strife led to a rise in kidnapping and vandalization of oil pipelines as well as other vices that were being perpetrated. After a period of …. Years, the Nigerian government intervened and the Amnesty program was created to help deliver some of the promises which government had made to the youths in those areas.

The baton was soon handed over to the Eastern Nigeria. Increase in the rate of armed robbery attacks, kidnappings as well as unbridled thuggery became the order of the day.

Today the Northern part of Nigeria has literally erupted with unrivalled violence. Bomb blasts, kidnaps and killings of Nigerians and others have become the prevailing trend. Despite beefing up of security in these areas, the problems still looms. This situation begs the questions, ‘’what is the government of the day willing to do to put a permanent end to these problems.

Unemployment:  Unemployment is a hydra-headed monster which exists among the youth in all developing countries. The unemployment rate in Nigeria was last reported at 23.9 percent in 2011. The National Bureau of Statistics (NBS) has put the figure of unemployed Nigerians in the first half of the year at 23.9 per cent, up from 21.1 per cent in 2010 and 19.7 per cent in 2009.

The National Population Commission (NPC) has said the country’s population has risen from the 140,431,790 it was five years ago when the last national headcount was taken, to 167,912,561 as at October 2011.This represents an annual population growth rate of 5.6 million people.

The Lagos Chamber of Commerce and Industry (LCCI) on Thursday restated its call for Nigeria to ratify the Africa Continental Free Trade Area Agreement (AfCFTA).AfCFTA is a trade agreement designed by the African Union (AU), with the goal of creating a …

The Minister of Information and Culture, Alhaji Lai Mohammed, has lauded the leading role being played by women in the country’s creative industry.The Minister gave the commendation at the opening of the 2019 Africa International Film Festival (AFRIFF)…